Canagliflozin, an orally active and selective sodium–glucose cotransporter 2 (SGLT2) inhibitor, was co-developed by Mitsubishi Tanabe Pharma and Johnson & Johnson (J&J) for the treatment of type 2 diabetes mellitus (T2DM) and obesity. The drug was approved in March by the U.S. FDA and launched in April 2013 in the U.S. SGLT2 is involved in the glucose re-absorption pathway in the kidney, and its inhibition increases urinary glucose excretion, and reduces plasma glucose and HbA1c levels. In addition, canagliflozin is safe in combination with other commonly used antidiabetic agents and has a significant effect on body weight reduction. A recently published process patent from ScinoPharm Taiwan describes the synthesis of canagliflozin.

Synthesis of the aglycone region of canagliflozin was described in a separate patent by first condensing commercially available 5- bromo-2-methylbenzoyl chloride (14) and 2-(4-fluorophenyl)- thiophene (15) under Friedel–Crafts acylation conditions to give ketone 16 in 69% yield as a crystalline solid. Ketone 16 was then reduced with triethylsilyl hydride in the presence of BF3Et2O at low temperature to give aglycone bromide 17 in 70% yield. The precursor for the glycoside moiety, commercially available glycoside triol 18, was selectively treated with t-butyldiphenylsilyl chloride (TBDPSCl) in THF in the presence of imidazole to give the bis-silyl ether 19 in 81% yield. Next, a unique, stereospecific b-C-arylglucosidation was developed to secure the union of the aglyone- and glycoside-containing portions of canagliflozin. Bromide 17 was subjected to magnesium powder under standard Grignard conditions prior to treatment with AlCl3 in THF in situ. This resulting mixture was then exposed to a solution of compound 19 in PhOMe which had been pre-treated with n-BuLi, and the entire mixture was then warmed to 150 ℃ for 5 h to ultimately give the b-anomer 20 in 56% yield. Finally, removal of the silyl groups within 20 with tetrabutyl ammonium fluoride (TBAF) in THF delivered canagliflozin hydrate (III) in 73% yield. 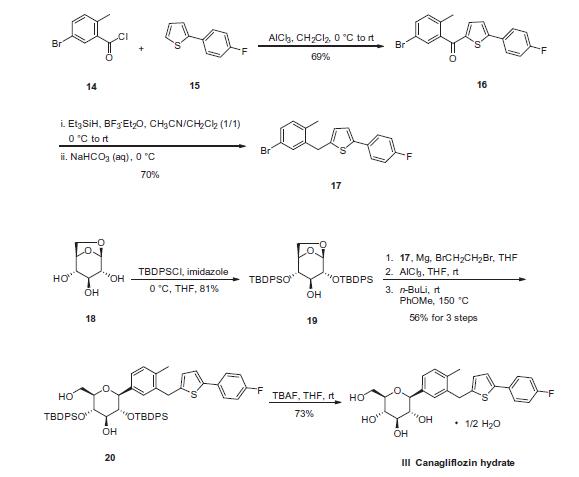