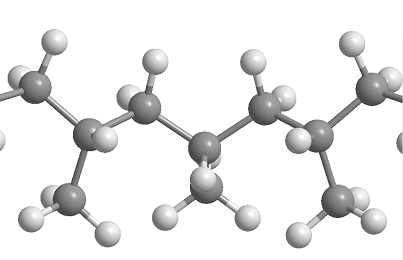 As the crystallinity or density increases, the products generally become stiffer and stronger and have a high softening temperature and high resistance to penetration by liquids and gases. At the same time, they lose some of their resistance to tear and environmental stress cracking.
High-density PE (HDPE) is a chemically pure, porous plastic implant material that can perform supportive functions. The material has good tissue biocompatibility and permits ingrowth of connective tissue with related vascularization. The material is being used more frequently in nasal surgery.
Polyethylene can be cross-linked by irradiation (electron beam, gamma, or X radiation) or by free radical catalysts such as peroxides.

Polyethylene is used in the development of plastics.

Polyethylene is a flexible waxy translucentpolyalkene thermoplastic made in avariety of ways producing a polymerof varying characteristics. In the ICIprocess, ethene containing a trace of oxygen is subjected to a pressure inexcess of 1500 atmospheres and atemperature of 200°C. Low-densitypolyethene (r.d. 0.92) has a formulaweight between 50 000 and 300 000,softening at a temperature around110°C, while the high-density polythene(r.d. 0.945–0.96) has a formulaweight up to 3 000 000, softeningaround 130°C. The low-density polymeris less crystalline, being more atactic.Polyethene is used as aninsulator; it is acid resistant and iseasily moulded and blown.
Polyethylene is a water-repellent, white, tough, leathery, thermoplastic resin very similar in appearance to paraffin wax. Properties vary from a viscous liquid at low molecular weights to a hard waxlike substance at high molecular weights. It is used as a coating for glass bottles and fiberglass fabrics (special treatments for glass are required to obtain good adhesion between polyethylene and glass) and is also used as an injection-molding material for ceramics.
In the polymerization process, the double bond connecting the carbon atoms is broken. Under the right conditions, these bonds reform with other ethylene molecules to form long molecular chains. Ethylene copolymers, EVA, and EEA are made by the polymerization of ethylene units with randomly distributed comonomer groups, such as vinyl acetate (VA) and ethyl acrylate (EA).

Polyethylene thermoplastic resins include lowdensity polyethylenes (LDPE), linear low-density polyethylenes (LLDPE), high-density polyethylenes (HDPE), and ethylene copolymers, such as ethylene-vinyl acetate (EVA) and ethylene- ethyl acrylate (EEA), and ultrahighmolecular- weight polyethylenes (UHMWPE). The basic properties of polyethylenes can be modified with a broad range of fillers, reinforcements, and chemical modifiers, such as thermal stabilizers, colorants, flame retardants, and blowing agents. Major application areas for polyethylenes are packaging, industrial containers, automotive, materials handling, consumer products, medical products, wire and cable insulation, furniture, housewares, toys, and novelties.
LDPE, the first of the polyethylenes to be developed, has good toughness, flexibility, low-temperature impact resistance, clarity in film form, and relatively low heat resistance. Like the higher-density grades, LDPE has good resistance to chemical attack.
One of the fastest-growing plastics is linear LLDPE, used mainly in film applications but also suitable for injection, rotational, and blow molding. Properties of LLDPE are different from those of conventional LDPE and HDPE in that impact, tear, and heat-seal strengths and environmental stress-crack resistance of LLDPE are significantly higher. Major uses at present are grocery bags, industrial trash bags, liners, and heavy-duty shipping bags for such products as plastic resin pellets.
Rigidity and tensile strength of the HDPE resins are considerably higher than those properties in the low- and medium-density materials. Impact strength is slightly lower, as is to be expected in a stiffer material, but values are high, especially at low temperatures, compared with those of many other thermoplastics.
HDPE resins are available with broad, intermediate, and narrow molecular-weight distribution, which provides a selection to meet specific performance requirements. As with the other polyethylene grades, very-high-molecular- weight copolymers of HDPE resins are available with improved resistance to stress cracking.
Applications of HDPE range from film products to large, blow-molded industrial containers. The largest market area is in blowmolded containers for packaging milk, fruit juices, water, detergents, and household and industrial liquid products. Other major uses include high-quality, injection-molded housewares, industrial pails, food containers, and tote boxes; extruded water and gas-distribution pipe, and wire insulation; and structural-foam housings. HDPE resins are also used to rotationally mold large, complex-shaped products such as fuel tanks, trash containers, dump carts, pallets, agricultural tanks, highway barriers, and water and waste tanks for recreational vehicles.

Linear PE is produced by a low-pressure solution or gasphase process that is initiated by a variety of transition metal catalysts. The most common catalysts are Ziegler titanium compounds with aluminum alkyls and Phillips chromium oxide-based catalysts. The gas-phase and slurry processes are used to produce high molecular weight, high-density (HMW-HDPE) products. The highest density linear PEs can be made from an α-olefin comonomer, typically octene for the solution process and butene or hexene for the gas-phase process. Linear PE does not have long-chain branches and is therefore more crystalline. The short-chain branches found in linear PE serve as tie molecules, which give the higher α -olefin copolymers improved puncture and tear properties. Included in the linear PE family are ultra-low-density PE (ULDPE), LLDPE, and HDPE.
HDPE’s main use is in blow-molded products such as milk bottles, packaging containers, drums, car fuel tanks, toys, and houseware. Film and sheet are widely used in wrappings, refuse sacks, carrier bags, and industrial liners. Injection molding products include crates, pallets, packaging containers, houseware, and toys. Extrusion grades are used in pipes, conduit, wire coating, and cable insulation.
LLDPE is a thermoplastic that in many applications replaces its predecessor, low-density polyethylene (LDPE), or is used in blends with LDPE. In particular, LDPE’s shortchain branching gives it higher tensile strength, puncture, and anti-tear properties, making it especially suitable for film applications.

LDPE is short for low density polyethylene. LDPE sheets are used for lining jute bags in which fertilizers are stored. LDPE acts as a waterproofing material.

Questionable carcinogen with experimental tumorigenic data by implant. Reacts violently with F2. When heated to decomposition it emits acrid smoke and irritating fumes.

IARC reports that data available do not allow the evaluation of carcinogenicity of ethylene in humans. Rats exposed to ethylene by inhalation show no increase in tumor incidence.

Crystallise it from thiophen-free *benzene and dry it over P2O5 under vacuum.