Reports of bisphenol- A sensitization, particularly in workers at epoxy resin plants, are controversial. Bisphenol-A was also reported as an allergen in fiberglass, semisynthetic waxes, footwear and dental materials.

Bisphenol A (BPA) was first synthesized in 1891, but it was not used widely until applications in the plastics industry were identified in the 1950s (University of Minnesota, 2008). While the most prominent use of BPA is in the manufacture of polycarbonate plastic and epoxy resins, it is also used in the production and processing of polyvinyl chloride (PVC) and modified polyamide and in the manufacture of carbonless and thermal paper, wood filler, adhesives, printing inks, surface coatings, polyurethane, brake fluid, resin-based dental composites and sealants, flame retardants, paints, and tires (ECB, 2003; EFSA, 2006). 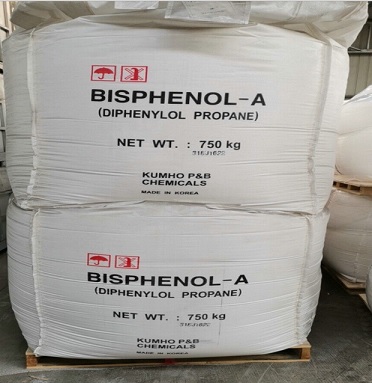 Bisphenol A (BPA) is used as the constitutional monomer or the monomeric building block of polycarbonate plastics, either by trans-esterification with diphenyl carbonate or via the interfacial process with a monohydroxylic phenol. Together with epichlorohydrin, BPA is also used as a major component of epoxy resins. Bisphenol A-polycarbonate plastics are in turn used in the manufacture of plastic food containers such as reusable water bottles, while epoxy resins are used as inner linings of tin cans. In addition, BPA is also used as an additive in other plastics and polymers, particularly as an antioxidant or stabilizer in polyvinyl chloride, printer ink, and in some other products.

A monomer used for policarbonate and epoxy resins; exhibits estrogenic activity. BPA is also used as a building block in polycarbonate bottles and in the epoxy-resin liners of metal cans.

The formation of bisphenol A is thought to proceed as follows: 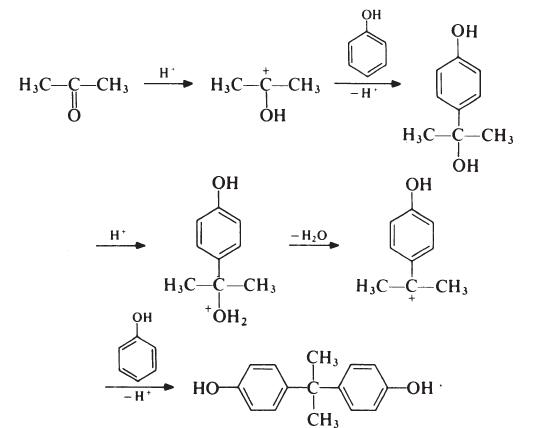 Although the reaction theoretically requires the molar ratio of reactants to be 2: 1, an improved yield of bisphenol A is obtained if additional phenol is present; the optimum molar ratio is 4: 1. In a typical process, the phenol and acetone are mixed and warmed to 50°C. Hydrogen chloride (catalyst) is passed into the mixture for about 8 hours, during which period the temperature is kept below 70°C to suppress the formation of isomeric products. Bisphenol A precipitates and is filtered off and washed with toluene to remove unreacted phenol (which is recovered). The product is then recrystallized from aqueous ethanol. Since epoxy resins are oflow molecular weight and because colour is not normally particularly important, the purity of bisphenol A used in resin production is not critical. Material with a p,p'-isomer content of 95-98% is usually satisfactory; the principal impurities in such material are o,p'- and o,o'-isomers.

ChEBI: A bisphenol that is 4,4'-methanediyldiphenol in which the methylene hydrogens are replaced by two methyl groups.

White to light brown flakes or powder. Has a weak medicine odor. Sinks in water.

The finely powdered resin is a significant dust explosion hazard. Insoluble in water.

Dusts irritating to upper respiratory passages; may cause sneezing.

Bisphenol A is combustible. Bisphenol A may form explosive dust clouds. Static electricity can cause its dust to explode.

Bisphenol A is used with epichlorhydrin for the synthesis of epoxy resins bisphenol-A type, for unsaturated polyester and polycarbonate resins, and epoxy di(meth)acrylates. In epoxy resins, it leads to bisphenol-A diglycidyl ether, which is the monomer of bisphenol-A-based epoxy resins. Reports of bisphenol-A sensitization are rare and concern workers at epoxy resin plants, after contact with fiber glass, semi-synthetic waxes, footwear, and dental materials. It is also a possible sensitizer in vinyl gloves.

Workers engaged in the manufacture of epoxy, polysulfone, polycarbonate and certain polyester resins. It is also used in flame retardants, rubber chemicals, and as a fungicide. Bisphenol A (BP A), an environmental estrogen, is found in a wide variety of products, including polycarbonate bottles food and drink containers. According to 2008 research conducted at University of Cincinnati, when it comes to BPA, it’s not whether polycarbonate bottles are new or old but the liquid’s temperature that has the greatest impact on how much BPA is released. When exposed to boiling hot water, BPA was released 55 times more rapidly than exposure to cold water.

Crystallise bisphenol from acetic acid/water (1:1). It is used for making polycarbonate bottles and leaches out slowly on heating. It is a known “estrogenic chemical” shown to disrupt chemical signaling in the complex network of glands, hormones and cell receptors which make up the endocrine system. It causes low sperm count and damages the ecosystem by the feminisation of fish, reptiles and birds. [cf Chapter 1, p 3, Beilstein 6 IV 6717.]

Bisphenol-A is a chemical substance with known oestrogenic action that is used in the manufacture of a wide range of products. The low-dose in utero exposure to bisphenol-A of experimental animals caused striking morphological changes in the vagina of postpubertal offspring. In addition, the oestrogen receptor alpha was not expressed during oestrus in the vagina of female offspring exposed to bisphenol-A and the altered vaginal morphology is attributed to the down regulation of oestrogen receptor alpha (Schonfelder et at., 2002). Another experiment on mice after intrauterine exposure to bisphenol-A showed differences in the rate of ductal migration into the stroma at 1 month of age and a significant increase in the percentage of ducts, terminal ducts, terminal end buds, and alveolar buds at 6 months of age. The changes in histoarchitecture, coupled with an increased presence of secretory product within alveoli, resemble those of early pregnancy. This suggests a disruption of the hypothalamic-pituitary-ovarian axis and/or mis-expression of developmental genes. It was concluded that the altered relationship in DNA synthesis between the epithelium and stroma and the increase in terminal ducts and terminal end buds are noteworthy, because these changes are associated with carcinogenesis in both rodents and humans (Markey et at., 2001).