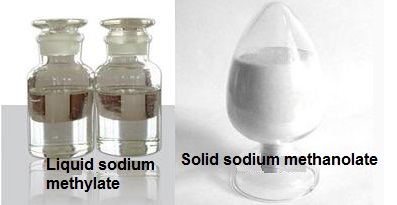 Solid sodium methanolate and sodium methoxide methanol solution
Sodium methylate is a kind of mature chemical products. It has several decades of production history in China. The overall price is high in the south than in the north. Its price is 4500 yuan/T in the southwest, and 4,000 yuan/T in Shandong. Its price changed little with the increase of methanol’s price in 2004. The profit of per ton of product is 500 to 700.

Sodium methylate is prepared by the reaction of methanol with sodium hydroxide for soda method. Their reaction is as follows:
CH3OH + NaOH→CH3ONa + H2O
1. The preparation of methanol lye
Crush the solid sodium hydroxide. Then add it into melting pot base containing methanol (99.8%) in proportion. Start circulating pump, and dissolve the sodium hydroxide below 70℃. When its content is 20% to 23%, cool down to 40℃ and inject into the settling tank. Stand 12h and spare.
2. The preparation of sodium methylate
Pass into the steam to the vaporization pot and reaction tower mezzanine. Heat it and control the temperature at 85~100℃. Add anhydrous methanol to vaporization pot at the flow rate of 180L/h. Meanwhile add methanol lye in the top of the reaction tower at the flow rate of 25kg/h. Methanol gas containing 2% of water produced by the reaction from the reaction distill the reaction tower overhead into the purification distillation column to remove water. Then it becomes absolute methanol recycling. Control the temperature of reaction bottoms (i.e. vaporization pot) at 65~70℃, and check the bottoms. When containing 27%~31% Sodium methanolate, 1% or less of the free base, products are obtained. The yield is 86% (as sodium hydroxide).
Fixed consumption of the process is as follows: methanol (95%) 973kg/t, sodium hydroxide (99.5%) 209kg/t.
The above information is edited by the chemicalbook of Ge Qian.

Sodium metal and methanol as raw materials, using intermittent production process to produce methanol solution of sodium methylate. The reaction is as follows:
2CH3OH + 2Na→2CH3ONa + H2↑
The production process is mainly divided into four parts:
1. Feeding step. Industrial methanol is pumped into methanol metering tank. 120kg of sodium metal is added into the reaction kettle.
2. Nitrogen substitution step. Close feed valve and vent valve. Purged with nitrogen into the reactor so that the index reached 0.1MPa. Open vent valve to remove the pressure, and repeat three times under reflux. The vent valve remains open to continue introducing nitrogen.
3. Reaction step. The cooling water is fed to the condenser. Methanol is immediately added to the methanol tank (note methanol addition rate). Nitrogen is stopped after 5~10min. Methanol is continuously added. 820kg of methanol is added in 2~3h and then the feed valve is closed. The reaction is continued for 2~3h until the reaction mixture has no bubbles.
4. Reconciliation step. The product is added into the harmonic tank. Sample and analysis. Reconcile to the desired concentration and barrels.

How to separate solid sodium hydroxide and sodium methylate

1. Dissolved in water (sodium alcoholate reacts violently with water to generate alcohol and sodium hydroxide)
2. Distillation (separate alcohol)
3. Evaporation (separate sodium hydroxide)
4. Try to dry alcohol to anhydrous state (repeated distillation)
5. Add sodium to generate sodium alcohol
6. Distill alcohol to get solid alcohol sodium. (It should be avoided being exposed to the air when distilling. If it is exposed to the air or it is taken down before drying up and cooling, the state of alcohol sodium that is separated out is not well. The good one is white. if not, it will be tan is. But it doesn’t have any great impact. It is easy to be prepared.)

Solid sodium hydroxide and methanol mix at a certain proportion. After stirring the mixture to dissolve, solid impurities are removed by sedimentation and clarification. The clear liquid is pumped into the top of the dehydration reaction column, while the refined methanol vapor is added from the bottom of the tower with continuous dehydration reaction. Then the product can be obtained from tower bottom. Aqueous methanol vapor is purified from the top of the column into the distillation system, while anhydrous methanol can be used repeatedly.

It can react with oxygen and carbon dioxide. It decomposes in water. Sodium test of the solution (IT-28) is positive.
Take 0.1m1 5% sulfuric acid and 0.2ml potassium permanganate solution (TS-193), and add 1 drop of 1% aqueous solution of the sample. After placing 5min, add 0.2ml 25% sodium sulfite solution and 3ml sulfate. Then add 0.2ml chromium changed acid solution (TS-l66). The solution is amaranth to purple.

1. Xylene (water content < 0.05) and metallic sodium are added into reaction vessel. Heat the reaction vessel to 130～140℃, keep for 1h and stop heating. After rapid stirring for 1h, use cooling water to 50℃. Then start to dropwise add anhydrous methanol (water content < 0.1%), and appropriately add dry xylene. The dropping rate depends on the flow rate of methanol and the release of hydrogen. After the dropwise addition finishes, heat it under reflux for 4h and cool to room temperature to obtain sodium methanolate slurry. Xylene can be recovered by vacuum distillation and then dried in vacuo for 4h. Sodium methanolate can be obtained by nitrogen cooling. The yield is over 90%. Sodium methanolate can also be prepared by the continuous reaction and dehydration of sodium hydroxide with methanol at 85～100℃.
2. It can be obtained by the reaction of sodium hydroxide and methanol in benzene.

Sodium methoxide is mainly used as a condensation agent, a strong alkaline catalyst and a methoxylating agent for the production of vitamin B1 and A, sulfadiazine and other drugs, and in small quantities for the production of pesticides. It is also used as a catalyst for treatment ofedible fats and oils, as an intermediate inmany synthetic reactions, to prepare sodiumcellulosate; and as a reagent in chemicalanalysis.

Sodium methylate is a white amorphous powder. It reacts with water to form sodium hydroxide, a corrosive material, and methyl alcohol, a flammable liquid. The heat from this reaction may be sufficient to ignite surrounding combustible material or the sodium methylate itself if the water is present in only small amounts. It is used to process edible fats and oils, and to make other chemicals.

SODIUM METHYLATE is a strong base. Reacts with light metals forming H2 gas, with fire and explosion hazards. Too rapid addition of sodium methylate to a mixture of chloroform and methanol initiated an uncontrolled exothermic reaction between the chloroform and the methylate that caused a violent explosion [MCA Case History 693 1961]. Sodium methoxide is incompatible with 4-chloronitrobenzene and fluorinated cyclopropenyl methyl ethers, such as perfluoromethoxycyclopropene. The reactions are vigorous and may initiate ignition [Bretherick, 1995, pg. 191].

TOXIC; inhalation, ingestion or skin contact with material may cause severe injury or death. Contact with molten substance may cause severe burns to skin and eyes. Avoid any skin contact. Effects of contact or inhalation may be delayed. Fire may produce irritating, corrosive and/or toxic gases. Runoff from fire control or dilution water may be corrosive and/or toxic and cause pollution.

Non-combustible, substance itself does not burn but may decompose upon heating to produce corrosive and/or toxic fumes. Some are oxidizers and may ignite combustibles (wood, paper, oil, clothing, etc.). Contact with metals may evolve flammable hydrogen gas. Containers may explode when heated.

A corrosive and irritating material. It hydrolyzes into methanol and sodlum hydroxide. May ignite spontaneously in moist air. Flammable when exposed to heat or flame. Ignites on contact with water, Violent reaction with (CHCl3 + CH3OH), (methyl azide + dimethylmalonate), FClO3. When heated to decomposition it emits toxic fumes of Na2O.

It behaves in the same way as sodium ethoxide. It is hygroscopic and is hydrolysed by moist air to NaOH and MeOH. Material that has been kept under N2 should be used. If erratic results are obtained, even with recently purchased NaOMe, it should be freshly prepared thus: Clean Na (37g) cut in 1-3g pieces is added in small portions to stirred MeOH (800mL) in a 2L three-necked flask equipped with a stirrer and a condenser with a drying tube. After all the Na has dissolved, the MeOH is removed by distillation under vacuum, and the residual NaOMe is dried by heating at 150o under vacuum and kept under dry N2 [Burness Org Synth 39 51 1959]. [Beilstein 1 IV 1227.]