Quinone (p-benzoquinone) exists as a large yellow, monoclinic prism with an irritating odour resembling that of chlorine. Quinone is extensively used as a chemical intermediate, a polymerisation inhibitor, an oxidising agent, a photographic chemical, a tanning agent, and a chemical reagent. Quinone (p-benzoquinone) was first produced commercially in 1919 and has since been manufactured in several European countries. Its major use is in hydroquinone production, but it is also used as a polymerisation inhibitor and as an intermediate in the production of a variety of substances, including rubber accelerators and oxidising agents. It is used in the dye, textile, chemical, tanning, and cosmetic industries. In chemical synthesis for hydroquinone and other chemicals, quinone is used as an intermediate. It is also used in the manufacturing industries and chemical laboratory associated with protein fibre, photographic film, hydrogen peroxide, and gelatin making. Occupational exposure to quinone may occur in the dye, textile, chemical, tanning, and cosmetic industries. Inhalation exposure to quinone may occur from tobacco smoke. 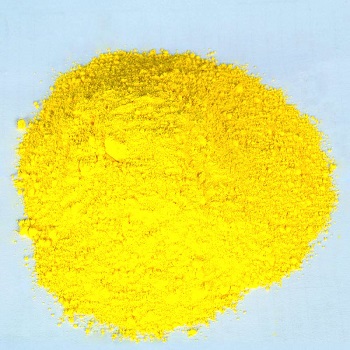 1,4-Benzoquinone or p-benzoquinone is the basic structure of quinonoid compounds.They are widely distributed in the natural world, being found in bacteria, plants and arthropods and hence quinones are ubiquitous to living systems. Quinones play pivotal role in biological functions including oxidative phosphorylation and electron transfer.

1,4-Benzoquinone is used in the manufacture of dyes, fungicide, and hydroquinone; for tanning hides; as an oxidizing agent; in photography; making gelatin insoluble; strengthening animal fibers and as reagent.

p-Benzoquinone is used as a dienophile in Diels-Alder cycloadditions to prepare naphthoquinones and 1,4-phenanthrenediones. It acts as a dehydrogenation reagent and an oxidizer in synthetic organic chemistry. In the Thiele-Winter reaction, it is involved in the preparation of triacetate of hydroxyquinol by reacting with acetic anhydride and sulfuric acid. It is also used in the synthesis of bromadol and to suppress double- bond migration during olefin metathesis reactions. It is used as a precursor to hydroquinone which finds application in photography and as a reducing agent and an antioxidant in rubber production.

Quinone was produced as early as 1838 by oxidation of quinic acid with manganese dioxide. Quinone can be prepared by oxidation starting with aniline or by the oxidation of hydroquinone with bromic acid. More recently, quinone has been made biosynthetically from D-glucose.

ChEBI: 1,4-benzoquinone is the simplest member of the class of 1,4-benzoquinones, obtained by the formal oxidation of hydroquinone to the corresponding diketone. It is a metabolite of benzene. It has a role as a cofactor, a human xenobiotic metabolite and a mouse metabolite.

Preparation of Quinone (p-Benzoquinone) from Hydroquinone.
Principle: Hydroquinone can be readily oxidized to quinone by using oxidizing agent like potassium dichromate and conc. H2SO4 or KBrO3.
Reaction:

Procedure: Take 0.5 g hydroquinone and 5 ml distilled water in a beaker (25 ml). Heat on a wire gauze to obtain a clear solution. Take 1 g potassium dichromate (K2Cr2O7) in a conical flask and dissolve in 10 ml water and add 1 ml conc. H2SO4. Shake and cool the conical flask in ice water. To this ice cold solution add hydroquinone solution (prepared above) dropwise over a period of 30 minutes with constant shaking. Do not allow the temperature to rise above 20oC. After complete addition, continue shaking for further 10 minutes. Yellow crystals of quinone separate out. Filter on a Buchner funnel and dry it well. (Note: Do not wash with water as the product is water soluble). Record the practical yield and re-crystallize from ethyl alcohol.
Re-crystallization: Dissolve the crude product in minimum amount of ethyl alcohol in a beaker by heating on a water bath. Filter the hot solution and cool the filtrate. The yellow needles of quinone separate out. Filter, dry and record the melting point and TLC (using toluene as a solvent).

1,4-Benzoquinone and its derivatives are extensively used in Diels-Alder reactions. A facile tautomerization of alkyl substituted 1,4-benzoquinone to o-quinone methide is the highlight of this cycloaddition.

Benzoquinone appears as a yellowish-colored crystalline solid with a pungent, irritating odor. Poisonous by ingestion or inhalation of vapors. May severely damage skin, eyes and mucous membranes. Used to make dyes and as a photographic chemical.

Soluble in water and denser than water. If moist 1,4-Benzoquinone may decompose spontaneously above 140°F. This has occurred in drums, causing over-pressurization.

1,4-Benzoquinone acts as an oxidizing agent .

1,4-Benzoquinone is moderately toxic viaingestion and skin contact. It is a mutagen andmay cause cancer. Because of its low vaporpressure, 0.1 torr (at 25°C 77°F), the healthhazard due to inhalation of its vapor is low.However, prolonged exposure may produceeye irritation, and its contact with the eyes can injure the cornea. Contact with the skincan lead to irritation, ulceration, and necrosis.
The toxicity of benzoquinone is similarto that of hydroquinone and benzenetriol.Repeated intraperitoneal administration of2 mg/kg/day to rats for 6 weeks produced significantdecreases in red blood cell, bone marrowcounts, and hemoglobin content (Raoet al. 1988). In addition, relative changes inorgan weights and injuries to the liver, thymus,kidney, and spleen were observed. Lauet al. (1988) investigated the correlation oftoxicity with increased glutathione substitutionin 1,4-benzoquinone. With the exceptionof the fully substituted isomer, increased substitutionresulted in enhanced nephrotoxicity.Although the conjugates were more stable tooxidation, the toxicity increased. The oral andintravenous toxicities of this compound in ratsare as follow:
LD50 value, oral (rats): 130 mg/kg
LD50 value, intravenous (rats): 25 mg/kg
The carcinogenicity of 1,4-benzoquinone inhumans is not reported. However, it is amutagen. It produced tumors in the lungs andskin of mice.

Poison by ingestion, subcutaneous, intraperitoneal, and intravenous routes. Questionable carcinogen with experimental tumorigenic data by skin contact. Human mutation data reported. Quinone has a characteristic, irritating odor. Causes severe damage to the skin and mucous membranes by contact with it in the solid state, in solution, or in the form of condensed vapors. Locally, it causes dlscoloration, severe irritation, erythema, swehng, and the formation of papules and vesicles, whereas prolonged contact may lead to necrosis. When the eyes become involved, it causes dangerous disturbances of vision. The moist material self-heats and decomposes exothermically above 60℃. When heated to decomposition it emits acrid smoke and fumes.

Due to this compound’s ability to react with certain nitrogen compounds to form colored sub- stances, quinone is widely used in the dye, textile, chemi- cal, tanning, and cosmetic industries. It is used as an industrial chemical; laboratory reagent; and as an interme- diate in chemical synthesis for hydroquinone and other chemicals.

Quinone has been tested for carcinogenicity in mice by skin application or inhalation and in rats by subcutaneous injection. None of these studies were considered sufficient to evaluate carcinogenicity (335, 336). A cancer bioassay of Tribolium-infested flour has been conducted but lack of quantification of quinone and methodological issues make the data difficult to interpret.
Quinone has produced negative results in studies designed to examine its ability to promote carcinogenicity. In a liver bioassay, quinone did not increase the formation of GGTpositive foci in the liver. Quinone did not promote induction of stomach or skin tumors in mice dosed with 7,12- dimethylbenzanthracene.

Quinone exists in the atmosphere in the gas phase. The dominant atmospheric loss process for quinone is expected to be by reaction with the hydroxyl (OH) radical (reaction with ozone is expected to be slow because of the >C(O) substituent groups). The estimated half-life and lifetime of quinone in the atmosphere due to reaction with the OH radical are w3 and 4 h, respectively. Release of 1,4-benzoquinone to the environment occurs via its effluents during its commercial production and use and in wastewaters from the coal industry. If released to soil, it is likely to leach (estimated Koc of 30) and may volatilize and photodegrade on soil surfaces. The ambient atmospheric concentration of 1,4-benzoquinone has been reported to be less than 15–80 ng m-3, and benzoquinone has been detected in tobacco smoke.

Purify p-benzoquinone in one or more of the following ways: steam distillation followed by filtration and drying (e.g. in a desiccator over CaCl2), crystallisation from pet ether (b 80-100o), *benzene (with, then without, charcoal), water or 95% EtOH, sublimation under vacuum (e.g. from room temperature to liquid N2). It slowly decomposes and should be stored, refrigerated, in an evacuated or sealed glass vessel in the dark. It should be resublimed before use. [Wolfenden et al. J Am Chem Soc 109 463 1987, Beilstein 7 IV 2065.]

The acute narcotic effects are due to the physical interaction of quinone itself on the cells of the central nervous system (CNS). The long-term effects are most likely due to the production of an unstable reactive intermediate during biotransformation or redox cycling. Cytochrome P450–mediated xenobiotic metabolism often leads to biological intermediates with attributes identical to quinones.