Excreted unchanged in urine
0 (<10 as metabolites)

Ibrutinib is a kind of Bruton tyrosine kinase (BTK) inhibitor, it could be used for the treatment of chronic lymphocytic leukemia (CLL) and mantle cell lymphoma (MCL). MCL and CLL are belonged to the B-cell non-Hodgkin's lymphoma, which is difficult to cure and easy to recurrent. Common chemical immunotherapy does not have the targeting, often occurs 3 or 4 adverse reactions. Ibrutinib and B lymphocytes could target with BTK which is necessary for formation, differentiation, and transmission of information, inhibit BTK activity irreversibly, and inhibit tumor cell proliferation and survival effectively. Ibrutinib could be rapidly absorbed after oral administration, during 1~2h reach maximum blood concentration, adverse reactions belong to one or two, therefore, Ibrutinib will become a new choice of treatment of CLL and MCL.
Food and Drug Administration (FDA) of USA has speed up approval of Pharmacyclics Corporation and Johnson & Johnson's Imbruvica (generic name: Ibrutinib) came to market to the cure a kind of rarely aggressive leukemia-mantle cell lymphoma (MCL) in 13th November, 2013. Ibrutinib is a new kind of oral Bruton tyrosine kinase (BTK) inhibitor, it was awarded by FDA be a breakthrough drugs in February of 2013, and approved the MCL and CLL treatments in 13th November, 2013 and 12th February, 2014 respectively. It could covalently bound selectively with cysteine residues (Cys-481) in active site of Btk target protein, irreversible inhibit BTK, thereby effectively prevent tumor cells from migrating from B cell to lymphoid tissue where adapt for tumor growth. Information was collated by Xiaonan editor of Chemicalbook.

Chronic lymphocytic leukemia (CLL) is a kind of chronic hematological malignancies that because mature lymphocytes cannot apoptosis normally, but the clonal proliferation in lymphoid tissues.CLL has some hereditary, it is a common form and belonged to non-Hodgkin's lymphoma (NHL) of B cells. Mantle cell lymphoma (MCL) is a rare B-cell NHL, 5%~10% accounting for all the NHL, it has refractory and aggressive of malignant lymphoma. MCL is difficult to diagnose, approximately 85% patients are diagnosed at stage Ⅲ~Ⅳ, and easy to relapse,which is the lowest long-term survival of lymphoma subtypes. Clinical manifestations are including High fever, fatigue, spleen and lymph nodes, infiltration of the gastrointestinal tract, and nervous system involvement.
At present, first-line treatment for CLL is FCR program, which is combining fludarabine (F), cyclophosphamide (C), and rituximab (R). This program had positive effect, but the survival was 38% Current first-line treatment for CLL is FCR program that of the three joint regimen, the program has some effect, but the rate of progression-free survival was 38%, it happened 3 or 4 adverse reactions sometimes. MCL often used anthracycline or high-dose cytarabine-containing drugs, but mostly conventional chemotherapy is not sensitive. Though there are many drugs for the treatment, survival was not significantly longer ; Although the program is also used in combination with chemotherapy drugs and monoclonal antibody therapy MCL, high toxicity has made the infection rate is about 14%, 3 to 4 adverse reaction rates as high as 87%. Therefore, coming up with more viable treatment programs and safe drugs are need to be introduced efficiently.

Ibrutinib was developed by American Celera Genentech (Celera Genomics) that was well known because it was the first one drawn "human genome". Pan Zhengying (now Beijing University Shenzhen Graduate School Distinguished Fellow) as the first author of this research and published the process of Ibrutinib in 2007 (ChemMedChem 2 (1): 58-61). But Celera had transferred the development rights to Pharmacyclics Company of California due to funding and resources. Although Pharmacyclics Company was in a very difficult stage, only $ 0.64 for the stock, facing delisting and bankruptcy in that time, company's management has managed to raise funds, spent only $ 2 million to down payment, 100 million shares and future sales royalty and milestone payment of royalties more to get Ibrutinib. In 2011, Johnson & Johnson subsidiary Janssen pay $ 150 million upfront payment in order to get the right to cooperate with Pharmacyclics. Once the new drugs in clinical trials and approved to listing, Pharmacyclics company will get $ 975 million in total revenue, and they will share the sales.When the deal was announced, Pharmacyclics stock is only $ 12. Market value was only several hundred million dollars. However, the stock is already $ 123, $ 9.05 billion value now.

Signaling pathway of B cell antigen receptor (BCR) is a key driver of tumor growth and spread. BTK as an indispensable participant for BCR signal peptide, it is very important for formation, differentiation, messaging and survival of B lymphocyte. BTK is an identifiable signal peptide molecules of BCR channel. When the signal peptide molecules across the B lymphocyte surface receptors, required channel is activated for transportation, chemotaxis and adhesion, which provide a convenience to be B-cell malignancies.
Ibrutinib is a small molecule can selectively and covalently bound to a cysteine residue (Cys-481) BTK active site, and irreversibly inhibit BTK activity, thereby inhibiting BCR activated signaling pathway, which could effectively prevent the tumor from B cells to lymphoid tissues where suitable for tumor growth, to reduce B cell proliferation and induce apoptosis of malignant cells, which play a role in the treatment of CLL and MCL. Non-clinical studies have shown that Ibrutinib can inhibit malignant B lymphocyte proliferation and survival.

Ibrutinib primarily metabolized by the cytochrome P450 (CYP3A and a small part of the CYP2D6) and produce a variety of metabolites after metabolism. The metabolite (PCI-45227) is a kind of dihydrodiol substance which is an activity of inhibiting BTK.Compared with Ibrutinib, PCI-45227 has much stronger inhibition on BTK, which is about 15 times stronger. At steady state, the average rate of metabolism of PCI-45227 is around 1~2.8.
Apparent clearance (CL/F) of Ibrutinibis is approximately 1 000 L/h, the half-life (t1/2) is 4~6 h. Ibrutinib mainly be metabolites in the body, excrete with the feces. To healthy subjects by oral radioactive 14C-labeled Ibrutinib, found that nearly 90% of the radiation were eliminated in 168 h, most (about 80%) of them were excreted with the feces, and nearly 10% were excreted in the urine, about 1 % be prototypes were excreted with the feces.
Elimination of Ibrutinib will not make a difference in age (37 to 84 years) and gender, but systemic exposure of patients with moderate hepatic injury will be 6 times higher than in healthy subjects.

4-phenoxy-benzoic acid (1) as raw materials, through chlorination, condensation with malononitrile, methylation and cyclization with hydrazine hydrate to obtain intermediate 5,5. With formamide cyclization to give the compound 6, 6 by Mitsunobu reaction and de-Boc protecting group was intermediate 8; intermediate 8 is reacted with acrylic acid chloride obtained Ibrutinib. 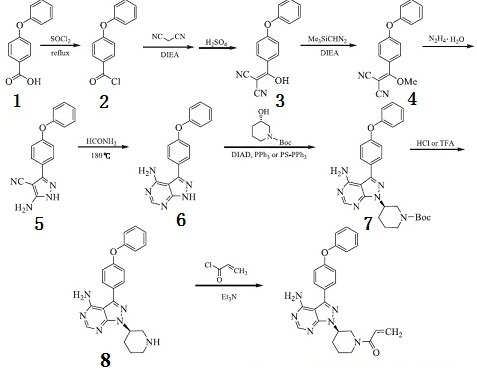 Ibrutinib (chemical name 1 [(3R)-3-[4-amino-3-(4-phenoxyphenyl)-1Hpyrazolo [3,4-d]pyrimidin-1-yl]-1-piperidinyl]-2-propen-1-one) is a first-in-class,potent, orally administered covalently-binding inhibitor of BTK.
Ibrutinib is a potent inhibitor of BTK that binds covalently to Cys-481 in the active site of BTK, resulting in inhibition of kinase activity. Ibrutinib does have significant activity against 19 other kinases, including seven with a cognate cysteine residue. These include BLK, BMX, ITK, TEC, EGFR, ERBB2, and JAK3.

Ibrutinib is rapidly absorbed, has a high oral plasma clearance and a high apparent volume of distribution at steady state. Pharmacokinetic (PK) parameters were not dependent on dose, study, or clinical indication. The fasting state was characterized by a 67% relative bioavailability compared with the meal conditions used in the trials. Body weight and co-administration of antacids marginally increased the volume of distribution and the duration of absorption, respectively. The linear model indicated that the compound’s PK was dose independent and time independent.

In November 2013, the US FDA approved ibrutinib (also referred to as PCI-32765), for the treatment of patients with mantle cell lymphoma (MCL) who had received at least one prior therapy. Ibrutinib is the second oral agent approved for the treatment of MCL. It works by irreversibly inhibiting Bruton’s tyrosine kinase (Btk) leading to the inhibition of B-cell receptor signaling and resulting in the reduction of malignant B-cell proliferation and induction of cell death. Btk plays an important role in the differentiation, development, proliferation, and survival of B cells via activation of cell-cycle regulators and regulating the expression of pro- and antiapoptotic proteins. Aberrant Btk activity results in a variety of B-cell malignancies including MCL. Ibrutinib inhibits Btk by irreversibly binding to cysteine-481 in the active site thereby inhibiting phosphorylation of tyrosine-223 and affecting downstream B-cell signaling pathways. Ibrutinib is a potent inhibitor of Btk (IC50=0.5 nM) and is efficacious in canine models of B-cell lymphoma. At dose ranges of 2.5–20 mg/kg, there was full occupancy of Btk in peripheral blood and tumor tissue for 24 h. A synthetic route to ibrutinib that employs Suzuki coupling of 3-iodo-1Hpyrazolo[3,4-d]pyrimidin-4-amine with (4-phenoxyphenyl)boronic acid followed by Mitsunobu reaction with N-Boc-3-hydroxypiperidine as key steps has been reported.

ChEBI: A member of the class of acrylamides that is (3R)-3-[4-amino-3-(4-phenoxyphenyl)pyrazolo[3,4-d]pyrimidin-1-yl]piperidine in which the piperidine nitrogen is replaced by an acryloyl group. A selective and covalent inhibitor of he enzyme Bruton's tyrosine kinase, it is used for treatment of B-cell malignancies.

The collection of ibrutinib (Imbruvica(R), Pharmacyclics Inc.), afatinib, and osimertinib represents the small, yet expanding, group of covalent SMKIs. Ibrutinib is a non-receptor Bruton’s tyrosine kinase inhibitor approved for the treatment of relapsed chronic lymphocytic leukemia. Afatinib, approved for NSCLC in 2013 and squamous NSCLC in 2016, is a second-generation irreversible EGFR inhibitor that targets wild-type EGFR, the mutant T790M EGFR, and HER2. Osimertinib (AZD9291), which was approved by FDA in November 2015, is a third-generation irreversible EGFR inhibitor that selectively targets the mutant T790M EGFR. Rociletinib, which shares a high degree of structural similarity with that of osimertinib, is a promising covalent EGFR inhibitor developed by Clovis Oncology aimed for the treatment of patients with EGFR T790M-mutated NSCLC, until the company terminated its development in May 2016 following a negative vote fromthe FDA’sOncologic Drugs Advisory Committee.

Condensation of commercially available 4-phenoxybenzoyl chloride (88) with malononitrile followed by acidic quench and O-methylation with dimethyl sulfate furnished vinyl dinitrile 89 in 84% yield over the three-step sequence. Next, treatment with hydrazine hydrate in refluxing ethanol secured aminopyrazole 90 and this was followed by treatment with neat formamide at elevated temperature to furnish pyrimidopyrazole 91 in excellent conversion. Selective alkylation of the pyrazole nitrogen with commercially- available (S)-piperidinyl tosylate (92) proceeded in 32% yield. Finally, liberation of the amide followed by pH adjustment and amide bond formation with acrolyl chloride furnished ibrutinib (XI) in 50% over the three-step sequence. 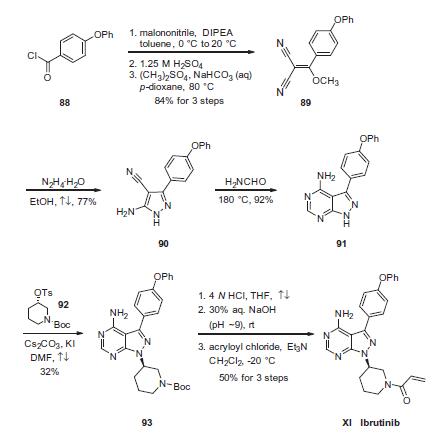 Ibrutinib is metabolised primarily by CYP3A4 to produce a dihydrodiol metabolite with an inhibitory activity towards BTK approximately 15 times lower than that of ibrutinib. Involvement of CYP2D6 in the metabolism of ibrutinib appears to be minimal.
After a single oral administration of radiolabeled [14C]-ibrutinib in healthy subjects, approximately 90% of radioactivity was excreted within 168 hours, with the majority (80%) excreted in the faeces and <10% in the urine. Unchanged ibrutinib accounted for approximately 1% of the radiolabeled excretion product in faeces and none in urine.