Tributyl phosphate is an odorless colorless to yellow liquid. The solubility of TBP is only 280 mg/L in water at 25°C. It is soluble in diethyl ether, benzene, carbon disulfide. It can be miscible with ethanol. It is stable, but it is incompatible with strong oxidizing agents. 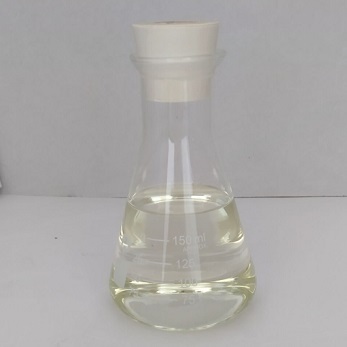 Tributyl phosphate (TBP) is an organophosphorus compound widely used as a solvent in nuclear fuel reprocessing for the extraction of uranium and plutonium from other radionuclides.
The major uses of tributyl phosphate (TBP) in industry are as a flame retardant component of aircraft hydraulic fluid and as a solvent for rare earth extraction and purification. Minor uses of TBP include use as a defoamer additive in cement casings for oil wells, as an anti-air entrainment additive for coatings and floor finishes, as a solvent in nuclear fuel processing, and as a carrier for fluorescent dyes.
The microbial degradation of tributyl phosphate was carried out using Klebsiella pneumoniae S3 isolated from the soil. The solubilization behavior of TBP in aqueous solutions of L64-Pluronics was studied using light and small angle neutron scattering (SANS).

Tributyl phosphate (TBP) is a trialkyl phosphate that is the tributyl ester of phosphoric acid. TBP is a toxic organophosphorous compound widely used in many industrial applications, including significant usage in nuclear processing. TBP is a solvent and plasticizer for cellulose esters such as nitrocellulose and cellulose acetate. The major uses of TBP in industry are as a component of aircraft hydraulic fluid and as a solvent for extraction and purification of rare earth metals from their ores, such as uranium and plutonium. TBP is used also in mercerizing liquids, where it improves their wetting properties. TBP is also used as a heat exchange medium. TBP is used in some consumer products such as herbicides and water thinned paints and tinting bases.

Tributyl phosphate is manufactured by reaction of phosphoryl chloride with n-butanol.
A 1-liter four-necked flask is fitted with an efficient condenser, an air-tight stirrer, a short-stemmed dropping funnel and a thermometer. Calcium chloride tubes are attached to the top of dropping funnel and the reflux condenser. 137 ml (111 g) of dry n-butyl alcohol, 132.5 ml (130 g) of dry pyridine and 140 ml of dry benzene are placed in the flask, which is stirred and cooled in an ice-salt mixture until the temperature falls to – 5° C. 40.5 ml (76.5 g) of freshly redistilled (b.p. 106-107° C) phosphorus oxychloride are dropwise added from the funnel at such a rate that the temperature does not rise above 10° C. When all phosphorus oxychloride has been added the reaction mixture is gently refluxed for 2 hours and cooled to room temperature. 250 ml of water are added in order to dissolve the pyridine hydrochloride, the benzene layer is separated, washed several times with water until the washings are neutral, and dried over anhydrous sodium or magnesium sulfate. The benzene is removed by evaporation and crude tributyl phosphate is purified by distillation in a vacuum. The fraction boiling at 160-162°/15 mm or 138-140°/6 mm is collected yielding 95 g of pure tributyl phosphate.

The industrial application of this chemical is responsible for occupational exposure and environmental pollution. Exposure to TBP can be from ingestion, inhalation, or skin or eye contact. This exposure will most often happen from occupational use of hydraulic fluid. If TBP is released to the environment, it will bind tightly to dust particles in the air. Unbound TBP will break down in air. It will move slowly through soil because it will bind with soil particles. It may volatilize slowly from moist soil and water surfaces. It may build up in aquatic organisms. It will be broken down in water by microbes.

On decomposition, TBP releases COx, toxic fumes of phosphoric acid, phosphorus oxides, and/or phosphine. TBP is incompatible with strong oxidising agents and alkalis. The major uses of TBP in industry are as a component of aircraft hydraulic fluid and as a solvent for rare earth extraction and purification. Minor uses of TBP include use as a defoamer additive in cement casings for oil wells, an anti-air entrainment additive for coatings and floor finishes, as well as a carrier for fluorescent dyes. The major uses of TBP comprise over 80% of the volume produced.

Tributyl phosphate is used as a plasticizer for cellulose esters, vinyl resins, and lacquers; and in making fireretardants, biocides, defoamers, and catalysts.

ChEBI: A trialkyl phosphate that is the tributyl ester of phosphoric acid.

Prepared by the reaction of phosphorus oxychloride with butyl alcohol.

Tributyl phosphate is an organophosphorus compound, which is widely used as a flame retardant and plasticizer in a variety of industrial products.

Tributyl phosphate is incompatible with strong oxidizing agents and strong bases. Attacks some forms of plastics and rubber .

Tributyl phosphate is a neurotoxic compound and an irritant. The toxic effects are characteristic of organic phosphates. It inhibits cholinesterase activity and causes paralysis. Inaddition,itcancausedepressionofthecentralnervoussystem,aswellasirritationofthe skin,eyes,andrespiratorypassage.Inhalation toxicity data in the literature are inconsistent.
The oral toxicity in rats was low; the LD50 value was reported as 1189 mg/kg (NIOSH 1986).
The pure liquid instilled into rabbits’ eyes caused severe irritation but no permanent damage. The irritation effect on the skin is mild.
Tributyl phosphate exhibited teratogenic effects in rats. There is no report on its carcinogenicity..

1. As an antifoaming agent.
2. As a plasticizer for cellulose esters, lacquers, plastics, and vinyl resins.
3. As a complexing agent in the extraction of heavy metals, especially for the extraction of metal ions from solutions of reactor products in nuclear fuel reprocessing.
4. As an aircraft hydraulic fluid.
5. As a heat exchange medium and dielectric.
6. As a pigment-grinding agent.

Poison by intraperitoneal and intravenous routes. Moderately toxic by ingestion, inhalation, and subcutaneous routes. Experimental reproductive effects. A skin, eye, and mucous membrane irritant. Combustible when exposed to heat or flame. To fight fire, use CO2, dry chemical, fog, mist. When heated to decomposition it emits toxic fumes of POx.

TBP was not genotoxic in a variety of in vivo and in vitro assays.7 It has been suggested that the carcinogenic effects of TBP are species- and organ specific. The necrotic actions of TBP (or a metabolite) on rat urinary bladder epithelium may induce chronic repair processes that cause the normal epithelium to be transformed into its metaplastic and neoplastic forms.
TBP was not teratogenic when administered to rats and rabbits during gestation; fetotoxic effects (delayed ossification and reduced fetal body weights) occurred in rats at doses that caused severe maternal toxicity. There was no evidence of reproductive toxicity or reproductive organ pathology in twogeneration studies in rats fed TBP in the diet.

The main contaminants in commercial samples are organic pyrophosphates, monoand dibutyl phosphates and butanol. It is purified by washing successively with 0.2M HNO3 (three times), 0.2M NaOH (three times) and water (three times), then fractionally distilled under vacuum. [Yoshida J Inorg Nucl Chem 24 1257 1962.] It has also been purified via its uranyl nitrate addition compound, obtained by saturating the crude phosphate with uranyl nitrate. This compound is crystallised three times from n-hexane by cooling to -40o, and then decomposed by washing with Na2CO3 and water. Hexane is removed by steam distillation; the water is then evaporated under reduced pressure, and the residue is distilled under reduced pressure. [Siddall & Dukes J Am Chem Soc 81 790 1959.] Alternatively, wash it with water, then with 1% NaOH or 5% Na2CO3 for several hours, then finally with water. Dry it under reduced pressure and fractionate it carefully under vacuum. It is a stable colourless oil, sparingly soluble in H2O (1mL dissolves in 165mL of H2O), but freely miscible in organic solvents. [Kuivila & Masterton J Am Chem Soc 74 4953 1952, Cox & Westheimer J Am Chem Soc 80 5441 1958, 31P NMR: Van Wazer J Am Chem Soc 78 5715 1956, Fertig et al. J Chem Soc 1488 1957, Beilstein 1 IV 1531.]

Tributyl phosphate is dissolved in a combustible solvent and is burned in a chemical incinerator equipped with an afterburner and scrubber.