Hydrogen sulfide is generally found as a pungent colorless flammable gas, although it is commonly shipped as liquefied compressed gas (NIOSH, 2011). Its characteristic odor of “rotten eggs” cannot be considered indicative of its concentration, as olfactory fatigue occurs quite rapidly, even at relatively low concentration levels (100–150 ppm). It has a vapor density of 1.19, which makes it heavier than air and will cause it to accumulate in low lying areas rather than disperse easily in air and thus can present a hazard for workers in basements, subterranean locations, and confined spaces. It is soluble in water to a maximum of 0.4% by mass at room temperature. The auto ignition temperature is 260 °C and the flammable limits in air, % by volume are 4.5 (lower) and 45.5 (upper). 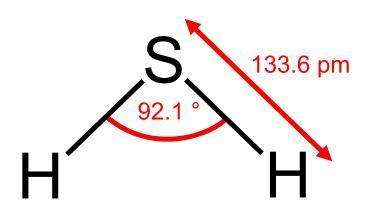 The tendency for belowground accumulation, coupled with its water solubility and flammability has proven to be a significant hazard for those who conduct work in underground tunnels or sewers (Adelson and Sunshine, 1966; Chen and Wang, 2012). Reactivity can occur from contact with strong oxidizers and oxidizing materials and result in fires and explosions. Hydrogen sulfide also attacks many metals resulting in the formation of sulfides and can lead to metal integrity issues.

Hydrogen sulfide (H2S) is one of the most important compounds of sulfur. It is a colorless gas with a foul, rotten-egg odor. It is well known in school laboratories when sulfur is being studied.
hydrogen sulfide (H2S) is known for its“rotten egg” odor and is a deadly poisonous gas even at 100 ppm of air. The laboratory reaction is FeS + 2HCl → H2S↑ + FeCl2.

Hydrogen Sulfide is a colorless, very poisonous, flammable gas with the characteristic foul odor of rotten eggs. It often results from the bacterial breakdown of organic matter in the absence of oxygen, such as in swamps and sewers where anaerobic digestion can take place. It also occurs in volcanic gases, “natural gas”, and some well waters. Hydrogen sulfide has numerous names, some of which are archaic.
Small amounts of hydrogen sulfide occur in crude oil, but natural gas can contain up to 90%. About 10% of the total global emission of H2S is due to human activity.

To produce elemental sulfur and sulfuric acid; in manufacture of heavy water and other chemicals; in metallurgy; as analytical reagent.

Hydrogen sulfide is used as an analyticalreagent and in the manufacture of heavywater. It occurs in natural gas and sewer gas.It is formed by the reaction of a metal sulfidewith dilute mineral acid, and in petroleumrefining.

ChEBI: A sulfur hydride consisting of s single sulfur atom bonded to two hydrogen atoms. A highly poisonous, flammable gas with a characteristic odour of rotten eggs, it is often produced by bacterial decomposition of organic matter in the absence of oxygen.

By far the largest industrial route toH2S occurs in petroleum refineries. The “hydrodesulfurization” process liberates sulfur from petroleum by the action of hydrogen. The resulting H2S is converted to elemental sulfur by partial combustion via the Claus process that is a major source of elemental sulfur (In the Claus process, hydrogen sulfide is catalytically reacted with oxygen from the air to produce sulfur and sulfur dioxide). Other anthropogenic sources of hydrogen sulfide include coke ovens, paper-mills (using the sulfate method), and tanneries, where Na2S is used for processing cowhide to form leather. H2S arises from virtually anywhere where elemental sulfur comes in contact with organic material, especially at high temperatures.

Hydrogen sulfide is produced during anaerobic respiration (fermentation). Anaerobic respirationenables organisms, primarily bacteria and other microbes, to meet their energy needsusing sulfate, elemental sulfur, and sulfur compounds as electron acceptors instead of oxygen.

Fluorine, chlorine, bromine, and iodine react with H2S to form the corresponding halogen acid. Metal sulfides are formed when H2S is passed into solutions of the heavy metals, such as Ag, Pb, Cu, and Mn. This reaction is responsible for the tarnishing of Ag and is the basis for the separation of these metals in classical wet qualitative analytical methods. Hydrogen sulfide reacts with many organic compounds.

Highly flammable; a flame can very easily flash back to the source of leak. Soluble in water to a maximum of 0.4% by mass at room temperature .

The acute toxicity of hydrogen sulfide by inhalation is moderate. A 5-min exposure to 800 ppm has resulted in death. Inhalation of 1000 to 2000 ppm may cause coma after a single breath. Exposure to lower concentrations may cause headache, dizziness, and upset stomach. Low concentrations of H2S (20 to 150 ppm) can cause eye irritation, which may be delayed in onset. Although the odor of hydrogen sulfide is detectable at very low concentrations, it rapidly causes olfactory fatigue at higher levels, and therefore is not considered to have adequate warning properties. Hydrogen sulfide has not been shown to be carcinogenic or to have reproductive or developmental effects in humans

Hydrogen sulfide is flammable in air in the range of 4.3 to 45.5% (NFPA rating = 4). Combustion products (sulfur oxides) are also toxic by inhalation. In the event of a hydrogen sulfide fire, stop the flow of gas if possible without risk of harmful exposure and let the fire burn itself out.

Hydrogen sulphide (H2S) is a colorless, poisonous, flammable gas with an odor of rotting eggs. It is found in cesspools and mines and is a by-product of decomposed substances containing sulphur. It is one of the gaseous end-products of the reduction of sulphate in highly degraded paddy fields. Hydrogen sulphide is also produced in the laboratory for use as an analytical reagent.

Dry hydrogen sulfide is satisfactorily handled under pressure at normal ambient temperatures in carbon steel or black iron piping. Carbon steels in wet applications are known to be subject to sulfide stress cracking and low- temperature brittle fracture under some conditions of temperature, stress, and pressure. While hydrogen sulfide itself is relatively noncorrosive to steel in many uses, factors such as impurities, pH, erosive conditions, and high thermal or mechanical stresses in the metal can cause severe corrosion problems. High-strength steels are subject to crack formation when exposed to hydrogen sulfide.

Hydrogen sulfide gas can be formed and released whenever waste containing sulfur is broken down by bacteria.

Hydrogen sulfide is a toxic, irritating, and asphyxiant gas. The substance is known to be produced and metabolized naturally in the human body at low concentrations, but can be quickly fatal once the natural bodily defenses are overwhelmed.
ACGIH recommends a Threshold Limit Value-Time-Weighted Average (TLV-TWA) of 10 ppm (14 mg/m3 ) for hydrogen sulfide. The TLV- TWA is the time-weighted average concentration for a normal 8-hour workday and a 40-hour workweek, to which nearly all workers may be repeatedly exposed, day after day, without adverse effect.
ACGIH recommends a Threshold Limit Value-Short Term Exposure Limit (TLVSTEL) of 15 ppm (21 mg/m3 ) for hydrogen sulfide. The TLV-STEL is the IS-minute TWA exposure that should not be exceeded at any time during a workday even if the 8-hour TWA is within the TLV- TWA. Exposures above the TLV- TWA up to the STEL should not be longer than 15 minutes and should not occur more than 4 times per day. There should be at least 60 minutes between successive exposures in this range.

Hydrogen sulfide is a colorless, flammable compressed liquid gas with a characteristic odor of rotten eggs. The solubility of hydrogen sulfide in water is 3980 mg l-1 at 20 ℃ and it is soluble in certain polar organic solvents, notably methanol, acetone, propylene carbonate, sulfolane, tributyl phosphate, various glycols and glycol ethers, gasoline, kerosene, crude oil, and carbon disulfide. The calculated vapor pressure at 21.9 ℃ is 1929 Pa. Boiling point and melting point of the substance are -60.33 ℃ and-85.49 ℃, respectively. Based on the estimated Henry’s law constant of 468 atm mol-1 for hydrogen sulfide, volatilization from water and soil is high.

cylinders of hydrogen sulfide should be stored and used in a continuously ventilated gas cabinet or fume hood. Local fire codes should be reviewed for limitations on quantity and storage requirements.

Toxicity of hydrogen sulfide is most likely related to inhibition of metal-containing enzymes such as cytochrome oxidase, the final enzyme of the mitochondrial respiratory chain, and carbonic anhydrase. Therefore, hydrogen sulfide affects cellular energy production and respiration. Mucous membranes and tissues with a high oxygen demand, like nervous and cardiac tissues are most susceptible tissues in exposure to hydrogen sulfide. In addition, sulfide also seems to act on the respiratory drive through other mechanisms such as suppression of synaptic activity, inhibition of monoamine oxidase, a direct action on respiratory centers in the brain, and stimulation of the glutamate receptors in the brain. The hydrosulfide anion also forms a complex with methemoglobin and creates sulfmethemoglobin. On the other hand, hydrosulfide can be produced endogenously, particularly in mammalian cells, through an enzymatic pathway and in a smaller part via a nonenzymatic pathway. Among enzymes involved in hydrosulfide production, cystathionine- synthase and cystathionine-lyase have been investigated extensively; both use vitamin B6 as a cofactor. Captopyruvate sulfurtransferase along with cysteine aminotransferase are involved in transsulfuration and reverse transsulfuration pathways in different capacities and utilize specific substrates. Of course, the regulation mechanisms for the expression and activities of these hydrosulfide-generating enzymes under physiological or pathophysiological conditions needs more research. These enzymes are differentially expressed in neuronal, immune, cardiovascular, renal, gastrointestinal, reproductive, respiratory, liver, and endocrine systems and affect the functions of these systems through production of hydrosulfide. Meanwhile, different molecular targets, such as different ion channels and signaling proteins, mediate physiological functions of hydrogen sulfide. Alternations of hydrosulfide metabolism lead to an array of pathological disturbances in the form of hypertension, diabetes, cirrhosis, atherosclerosis, heart failure, inflammation, sepsis, erectile dysfunction, asthma, and neurodegenerative disease.

Hydrogen sulfide is incompatible with strong oxidizers. It will attack many metals, forming sulfides. Liquid hydrogen sulfide will attack some forms of plastics, rubber, and coatings. H2S reacts violently with a variety of metal oxides, including the oxides of chromium, mercury, silver, lead, nickel, and iron.

To respond to a release, use appropriate protective equipment and clothing. Positive pressure air-supplied respiratory protection is required. Close cylinder valve and ventilate area. Remove cylinder to a fume hood or remote area if it cannot be shut off. Disposal Excess hydrogen sulfide should be returned to the manufacturer, according to your institution's waste disposal guidelines. For more information on disposal procedures, see Chapter 7 of this volume.