Ferric chloride, solution appears as a colorless to light brown aqueous solution that has a faint hydrochloric acid odor. Highly corrosive to most metals and probably corrosive to tissue. Noncombustible. Used in sewage treatment and water purification. 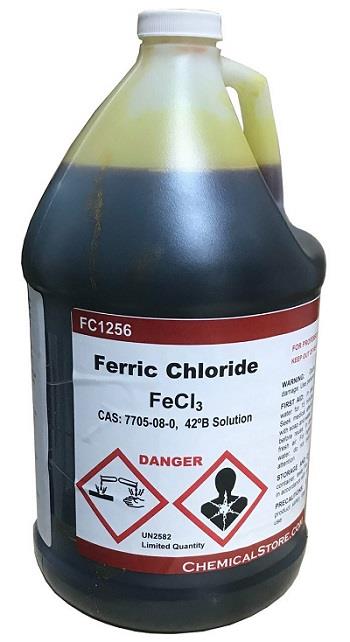 Iron(III) chloride occurs naturally as the mineral molysite. The compound is widely used to prepare a number of iron(III) salts. Also, it is applied in sewage and industrial waste treatment processes. It also is used in the manufacture of dyes, pigments and inks; as a chlorinating agent; and as a catalyst in chlorination reactions of aromatics.

In the laboratory, anhydrous Ferric chloride（FeCl3）can be used as an alternative to anhydrous AlCl3 in Friedel-Crafts reactions, like the alkylation or acylation of aromatic rings. Being a small, highly charged metal, it polarises reagents like halogenoalkanes (alkyl halides), which generates carbocations (carbenium ions) that then attack benzene rings, as in the synthesis here.

Iron(III) chloride forms passing chlorine gas over iron filings at 350°C:
2Fe + 3Cl2 → 2FeCl3
It also forms heating iron(III) oxide with HCl at elevated temperatures:
Fe2O3 + 6HCl → 2FeCl3 + 3H2O
The product may be sublimed in a stream of chlorine to give high purity grade iron(III) chloride.
The anhydrous chloride also may be made by heating the hexahydrate, FeCl3•6H2O, with thionyl chloride:
FeCl3•6H2O + 6SOCl2 → FeCl3 + 12HCl + SO2

The following list represents some of the most common and largest applications of Ferric Chloride:
As a purifying agent in water supply and as a coagulant in municipal and industrial wastewater treatment. In this application, Ferric chloride’s rapid hydrolysis in water makes it an ideal flocculating and precipitating agent. The ferric hydroxide (Fe[OH]3) produced forms flocs (small clumps or tufts) that adsorb suspended particles of various materials (e.g., colloids, clays and bacteria). The clumps, with the adsorbed matter, are then allowed to settle for easy removal. Ferric chloride forms precipitates with hydrogen sulfide (H2S), phosphate (PO4), arsenic as arsenate (AsO4) and hydroxide alkalinity (OH).
As an oxidant in indigo blue dyestuff production.
As an etching medium in producing printed circuit boards (PCBs).
As a catalyst for the reaction of ethylene with chlorine, forming ethylene dichloride (1,2-dichloroethane), an important commodity chemical, which is mainly used for the industrial production of vinyl chloride, the monomer for making PVC.
www.marchpump.com

Ferric Chloride is a black-brown, dark-green, or black crystalline solid.

Ferric chloride,FeCl3, is a brown crystalline solid and is soluble in water,alcohol,and glycerol. It is also known as anhydrous ferric chloride,ferric trichloride, Flores martis,and iron chloride. Ferric chloride is used as a coagulant for sewage and industrial wastes, as an oxidizing and chlorinating agent,as a disinfectant, in copper etching, and as amordant. In addition, this compound is employed in the ferric chloride test,which is used to assess the relative corrosion resistance of stainless and nickel-base alloys. The ferric chloride test has been shown to be an appropriate measure of the suitability of such alloys for service in paper mill bleach plants and seawater.

It is used for sewerage treatment of industrial wastes, chloride hydrometallurgy (Silgarin process for the production of silicon), drinking water production, production of precursor for polyvinyl chloride (PVC), and copper-based metals in printed circuit boards. Iron (III) chloride is used as catalyst for the reaction of ethylene with chlorine, as a leaching agent, and as a drying reagent in certain reactions. It is a mild oxidizing agent and converts copper(I) chloride in to copper(II) chloride. As a moderately strong Lewis acid, it catalyzes chlorination of aromatic compounds and Friedel-Crafts reactions. Along with sodium iodide, it brings about reduction of organic azides to corresponding amines. It is useful in the detection of phenols and phenolic derivatives, gamma-hydroxybutyric acids, and also in Trinder spot test for detecting salicylic acids.

Ferric Chloride is a nutrient and dietary supplement that serves as a source of iron.

Very hygroscopic. Slightly water soluble, where a 0.1M solution has a pH of 2.0.

Alkali metal hydroxides, acids, anhydrous chlorides of iron, tin, and aluminum, pure oxides of iron and aluminum, and metallic potassium are some of the catalysts that may cause ethylene oxide to rearrange and polymerize, liberating heat, [J. Soc. Chem. Ind. 68:179(1949)]. Explosions occur , although infrequently, from the combination of ethylene oxide and alcohols or mercaptans, [Chem. Eng. News 20:1318(1942)]. Allyl chloride may polymerize violently under conditions involving an acid catalyst, such as sulfuric acid, Ferric chloride, aluminum chloride, Lewis acids, and Ziegler type catalysts (initiators), [Ventrone (1971)].

Toxic by ingestion, strong irritant to skin and tissue.

Ferric chloride (FeCl3) is obtained by an iron chlorination method at a temperature of 600–700 °C. Very limited data are available on the use of ferric chloride in the mineral processing industry. Ferric chloride has a depressing effect on barite and can be used in barite–celestite separation. It was also evaluated as a depressant during niobium– zirconium separation. In general, ferric and ferrous compounds are not selective depressants and in many cases are detrimental for flotation of oxidic and industrial minerals as in the case of anionic flotation, fatty acid, iron complexes or oleate iron complexes.

Iron chloride is used to treat sewage and industrial waste. It is also used as an etchant for photo engraving and rotogravure; in textiles; photography; as a disinfectant; as a feed additive.

Sublime it at 200o in an atmosphere of chlorine. It is an “iron-black” coloured powder with green irridescence. Store it in a weighing bottle inside a desiccator as it absorbs moisture from air to form the yellow hexahydrate (see next entry). [Tarr Inorg Synth III 191 1950, Pray Inorg Synth V 153 1957, Epperson Inorg Synth VII 163 1963.]

The crystalline solid has a semicovalent layer structure with hexagonal packing of chloride ions, each iron atom being surrounded octahedrally by six chlorines in a BiI3 type structure. The dimers in the vapour phase have a structure similar to that of Al2Cl6 with the iron atoms surrounded by chlorines in a roughly tetrahedral fashion. The magnetic properties of iron(III) chloride in its different environments have been investigated extensively. The magnetic moment at 290°K is 5-73 B.M. and is independent of the field strength. In aqueous hydrochloric acid the room temperature moment is 5-94 B.M. and the hexahydrate has a similar moment (5-95 B.M.).

Neutralize with lime or soda ash and bury in an approved landfill.