In the production of ethylene, vinyl chloride, and chlorinated hydrocarbons; as a component of bottled fuel gas.

Ethane is a colorless, odorless, flammable gas that is relatively inactive chemically and is considered nontoxic. It is shipped as a liquefied compressed gas under its vapor pressure of 544 psig at 70°F (3750 kPa at 21.1℃).

ETHANE is colorless, odorless gas, practically insoluble in H2O, moderately soluble in alcohol. The compound burns when ignited in air with a pale faintly luminous flame; forms an explosive mixture with air over a moderate range. With excess air, products of combustion are CO2 and H2O. Ethane is among the chemically less reactive organic substances. However, ethane reacts with chlorine and bromine to form substitution compounds. Ethane occurs, usually in small amounts, in natural gas. The fuel value of ethane is high, 1,730 Btu per cubic foot. Ethane may be prepared by reaction of magnesium ethyl iodide in anhydrous ether (Grignard’s reagent) with H2O or alcohols. Ethyl iodide, ethyl bromide, or ethyl chloride, are preferably made by reaction with ethyl alcohol and the appropriate phosphorus halide. Important ethane derivatives, by successive oxidation, are ethyl alcohol, acetaldehyde, and acetic acid. 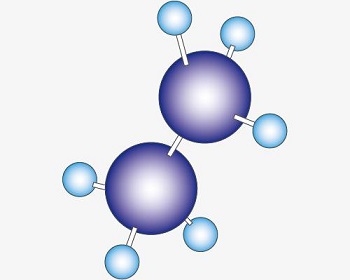 Ethane was first synthesized in 1834 by Michael Faraday (1791–1867) through the electrolysis of acetate solutions, although Faraday believed the compound was methane. Twenty years later Adolph Wilhelm Hermann Kolbe (1818–1884) incorrectly identified ethane as the methyl radical in his research, and Edward Frankland (1825–1899) prepared ethane by treating ethyl iodine (C2H5I) with metals.

Ethane is the second major component in naturalgas. It is formed by petroleum cracking.It is used as a fuel gas, in the manufactureof chloro derivatives, and as a refrigerant.

It was first applied to the compound ether (CH3CH2OCH2CH3). Ether isa highly fl ammable compound that wasfirst prepared from the two-carbon alcohol ethanol(C2H5OH), and ethane is the two-carbon alkane. Ethane is the second most abundant componentof natural gas, with sources typically containing 1–5% by volume, but some sourcesmay contain up to 30% ethane.

In the manufacture of chlorinated derivatives; as refrigerant in some two-stage refrigeration systems where relatively low temperatures are produced; as fuel gas (so called "bottled gas" or "suburban propane" contains about 90% propane, 5% ethane, and 5% butane).

ethane: A colourless flammablegaseous hydrocarbon, C2H6; m.p.–183°C; b.p. –89°C. It is the secondmember of the alkane series of hydrocarbonsand occurs in natural gas.

The synthesis of ethane takes place through a process called Kolbe synthesis. In this processacetic acid (CH3COOH) undergoes electrolysis to oxidize acetate ions at the anode of an electrochemicalcell to produce acetate radicals: CH3COO- → CH3COO?. Two acetate radicals thencombine to give ethane and carbon dioxide: CH3COO? + CH3COO? → C2H6 + 2CO2.

A gaseous alkane obtained either from the gaseous fraction of crude oil or by the ‘cracking’ of heavier fractions. Ethane is the second member of the homologous series of alkanes.

A colorless odorless gas. ETHANE is easily ignited. The vapors are heavier than air. ETHANE can asphyxiate by the displacement of air. Under prolonged exposure to fire or intense heat the containers may rupture violently and rocket. Contact with the liquid may cause frostbite.

Like methane, ethane is a nonpoisonous gas.It is a simple asphyxiate. At high concentrationsit may exhibit narcotic effects.

EXTREMELY FLAMMABLE. Will be easily ignited by heat, sparks or flames. Will form explosive mixtures with air. Vapors from liquefied gas are initially heavier than air and spread along ground. CAUTION: Hydrogen (UN1049), Deuterium (UN1957), Hydrogen, refrigerated liquid (UN1966) and METHANE (UN1971) are lighter than air and will rise. Hydrogen and Deuterium fires are difficult to detect since they burn with an invisible flame. Use an alternate method of detection (thermal camera, broom handle, etc.) Vapors may travel to source of ignition and flash back. Cylinders exposed to fire may vent and release flammable gas through pressure relief devices. Containers may explode when heated. Ruptured cylinders may rocket.

Ethane is noncorrosive and may be contained in installations constructed of any common metals designed to withstand the pressure involved.

A simple asphyxiant. See ARGON for properties of simple asphyxiants. A very dangerous fire hazard when exposed to heat or flame; can react vigorously with oxidizing materials. Moderate explosion hazard when exposed to flame. To fight fire, stop flow of gas. Incompatible with chlorine, doxygenyl tetrafluoroborate, oxidizing materials, heat or flame. When heated to decomposition it emits acrid smoke and irritating fumes.

Ethane is used as a fuel, in making chemicals or as a freezing agent. The health effects caused by ethane exposure are much less serious than the fire and explosion risk posed by this chemical

Inhalation of ethane in concentrations in air up to 5 percent produces no definite symptoms, but inhalation of higher concentrations has an anesthetic effect. It can act as a simple asphyxiant by displacing the oxygen in the air. Contact between liquid ethane and skin can cause freezing of the tissue.

Syrian hamster embryo cells were exposed in vitro to ethane gas. After exposure, the cells were removed and assayed for viability and increased sensitivity to viral transformation. Ethane was determined to be inactive.

All the precautions required for the safe handling of any flammable compressed gas must be observed with ethane. It is important that ignition sources be kept away from containers, including situations where leakage could cause the gas to ignite by such sources as a spark from a motor. AlI piping and equipment used with ethane should be grounded.
Ethane should not be stored with cylinders containing oxygen, chlorine, or other oxidizing or combustible materials.

UN1035 (compressed gas); UN1961 (refrigerated liquid): Ethane, Hazard Class: 2.1; Labels: 2.1-Flammable gas. Cylinders must be transported in a secure upright position, in a well-ventilated truck. Protect cylinder and labels from physical damage. The owner of the compressed gas cylinder is the only entity allowed by federal law (49CFR) to transport and refill them. It is a violation of transportation regulations to refill compressed gas cylinders without the express written permission of the owner.

Ethylene can be removed by passing the gas through a sintered-glass disc into fuming H2SO4 then slowly through a column of charcoal saturated with bromine. Bromine and HBr are removed by passage through firebrick coated with N,N-dimethyl-p-toluidine. The ethane is also passed over KOH pellets (to remove CO2) and dried with Mg(ClO4)2. Further purification is by several distillations of liquified ethane, using a condensing temperature of -195o. Yang and Gant [J Phys Chem 65 1861 1961] treated ethane by standing it for 24hours at room temperature in a steel bomb with activated charcoal treated with bromine. They then immersed the bomb in a Dry-ice/acetone bath and transferred the ethane to an activated charcoal trap cooled in liquid nitrogen. (The charcoal had previously been degassed by pumping for 24hours at 450o.) By allowing the trap to warm slowly, the ethane distils, and only the middle third fraction is kept. Removal of methane is achieved using Linde type 13X molecular sieves (previously degassed by pumping for 24hours at 450o) in a trap which, after cooling in Dry-ice/acetone, is saturated with ethane. After pumping for 10minutes, the ethane is recovered by warming the trap to 25o. (The final gas contains less than 10-4 mole % of either ethylene or methane). [Beilstein 1 IV 108.]

Flammable gas; forms explosive mixture with air. Strong oxidizers may cause fire and explosions. May accumulate static electrical charges, and may cause ignition of its vapors.

Return refillable compressed gas cylinders to supplier. Dissolve or mix the material with a combustible solvent and burn in a chemical incinerator equipped with an afterburner and scrubber. All federal, state, and local environmental regulations must be observed.