Imidazole is between the two nitrogen atoms of five membered heterocyclic compounds containing. The unshared electron pair of 1-bit nitrogen atom in imidazole ring participates in the cyclic conjugation, reduces the electron density of the nitrogen atom, and makes hydrogen of the nitrogen atom easily leave in the form of hydrogen. Therefore imidazole has weak acidity, and can form salt with strong base.
The unshared electron pair of 3-bit nitrogen atom in imidazole ring doesn’t participates in the cyclic conjugation, while it occupies the sp2 hybridized orbital, can accept protons, and form salt with strong acid. Alkaline of imidazole is slightly stronger than pyrazole and pyridine.
There is tautomerism in the imidazole ring. The hydrogen on the 1-bit nitrogen atom can be transferred to the 3-atom, therefore, imidazole derivatives with same substituent respectively on 4-bit and 5-bit are tautomers.
Imidazole is stable to acid, and has antioxidant activity. Imidazole derivatives are widely found in nature, such as histamine, histidine and benzimidazole, etc.
There are some interesting reagents in acyl imidazole compounds. For example, 1-acetyl imidazole is a stable acylating agent, after reaction with pyrrole, it becomes 1-acetyl pyrrole. Furthermore, in general, 1-acetyl imidazole can get ketones and aldehydes using Grignard reagent and reducing agent. Reaction of N, N-carbonyldimidazole and carboxyl will get useful reagent acyl imidazole. The relationship between imidazole and natural compounds is very close. For example, pyrimidine ring turns into purine derivatives after condensation. In addition to being like 6-amino purine and guanine the nucleic acid bases, it also exists in the organisms of uric acid, caffeine and theophylline. The catalytic action of imidazole, such as accelerated enzyme hydrolysis, still under study. As the cause of allergic skin, its toxicity is similar todiamine. Rat oral LD501880mg/kg. 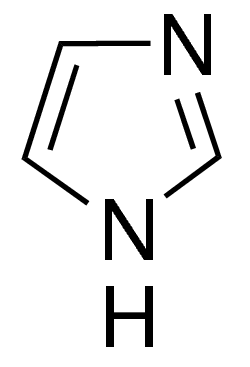 In nature, there are only imidazole derivatives and no free imidazole. The precipitation from benzene is a colorless crystalline prism, with scents of ammonia. Relative molecular mass 68.08. Relative density 1.0303(101/4℃) . Melting point 89～91℃，boiling point 257℃，165℃～168℃(2.67×103Pa) and 138.2℃(1.60×103Pa). Flash point 145℃. Refractive index 1.4801(101℃). Viscosity 2.696mPa·s(100℃). Slightly soluble in benzene, petroleum ether, soluble in ether, acetone, chloroform and pyridine, easily soluble in water (at normal temperature 70) and ethanol. It appears weak alkaline. As the-NH-bond on 1 bite and-N= bond on 3 bit forms hydrogen bond, the boiling point is quite high; when 1 bit hydrogen is substituted, hydrogen bond cannot be formed, hence the boiling point decreases. As to thermal stability, it rarely dissolves under 250℃ (decomposition temperature is 590℃). It is also very stable to reducing agent and oxidant, but can form stable salt with inorganic acid. Owning some certain aromatic properties, also could get halogenation, nitration, sulfonation and hydroxymethylation in the presence of catalyst. Can be coupled with the heavy nitrogen salt in 2 bit. In addition, due to the =NH (1 bit) connected to the two double bonds, with some of the "acid", it can be replaced by metal to get salt. In addition, 3 bit nitrogen ions have coordination effect on metal ions, which can form chelate compounds. Although it is difficult to restore, but can be combined with the proton to generate cation type with resonance structure, and get of a stable form. Tautomers of imidazole ring are very easy to change, so it is hard to tell isomers on 4 bit or 5 bit.
The above information is edited by the Chemicalbook He Liao Pu.

With glyoxal as raw material, reactive in formaldehyde and ammonium sulfate (or ammonia) in 85~90℃, and get imidazole sulfate and then neutralized with calcium hydroxide to get imidazole crude product. Filtering, water washing, combining filtrate and washings, decompression evaporation concentration and crystallization, then it’s done. If using ammonia directly, then there should be no sulfate processing steps and it can be prepared at once. Either with ammonium sulfate or ammonia, the yield is relatively low, approximately 45%.
With o-phenylenediamine and formic acid as raw material, via cyclization to benzimidazole, and then through oxidation in the sulfuric acid solution to generate dicarbonyl imidazole; later in the effect of copper oxidation, via decarboxylation from 100 to 150℃ to get crude; And then in benzene solution recrystallization to get imidazole finished products.
With d-tartrate acid as raw material, in sulfuric acid, nitric acid was used to carry out nitrification, and get 2, 3-dinitro tartrate acid; and then in the formaldehyde and ammonia reaction, to get dicarboxylic imidazole; finally decarboxylation to get it.

1.Used as intermediate of bactericide for imazalil, prochloraz, etc., and that of pharmaceutical anti-fungal drug, econazole, ketoconazole, and clotrimazole as well.
2.Used as organic synthetic materials and intermediates for the preparation of drugs and pesticides.
3.Used as analytical reagent, as well as in organic synthesis.
4.Imidazole is mainly used as curing agent for epoxy resin. In Japan the imidazole accounts for less than half of the consumption. For imidazole compounds whose dosage is 0.5 to 10 percent of epoxy resin, it can be used in antifungal drug, ant mildew agent, hypoglycemic drug, artificial plasma, etc., also can be used in medicines to cure trichomoniasis and turkey blackhead. Imidazole is also one of the main raw material during production of imidazole antifungal miconazole, econazole, clotrimazole and ketoconazole. By imidazole and 2, 4, ω-trichloroacetophenon as the main raw material, it can get fruit fungicide enilconazde. Add 2, 4, ω-trichloroacetophenon into absolute methanol, with heating reflux, adding bromine. Wait until the solution color gradually disappeared, cooling to 0℃, and then intensely mixing it for 3h. And the vacuum distillation of methanol. Put the remaining liquid into the water, to extract it with dichloromethane. After the extract recovered with dichloromethane, add dilute nitric acid to get salt; recrystallization with water and then treated with ammonia to get 2', 4'-dichloro-2-imidazole acetophenone. Furthermore use sodium borohydride reduction into the corresponding alcohols, and then in the presence of sodium hydroxide and dimethyl formamide, use allyl chloride based to get enilconazde (also known as enilconazole). the after adding dilute nitric acid salt and water after recrystallization using ammonia water treatment of 2,2 ', 4'-dichloro 2-methyl imidazole phenyl ethyl ketone. It has something in common of the structure and production methods between enilconazde and miconazole. Miconazole is a broad-spectrum antifungal agent, and enilconazde is also antifungal agent, which is widely used in imazalil.
5.Agrochemical intermediates, bactericide intermediates, triazole fungicide.

Imidazole is a heterocyclic compound with a five-membered planar ring. It is amphoteric and highly polar.The pharmacophore of imidazole exists in bioactive compounds including amino acids, plant growth regulators and therapeutic agents.

Excellent for buffers in the range of pH 6.2-7.8
Imidazole has been used

Imidazole is used as a buffer in the range of pH 6.2-7.8. It is also an histamine antagonist. It acts as a chelator and forms complexes with various divalent cations. It is used as a corrosion inhibitor on certain transition metals such as copper. Its derivatives, like polybenzimidazole (PBI), act as fire retardants. It finds application in photography and electronics. Imidazole salts are used as ionic liquids and precursors to stable carbenes. Imidazole derivatives like ketoconazole, miconazole and clotrimazole are involved in the treatment of various systemic fungal infections. It is a part of the theophylline molecule, present in tea leaves and coffee beans, which stimulates the central nervous system.

Imidazole is a versatile heterocycle used in the preparation of various biologically active compounds such as the amino acid histidine and is present in many antifungal medication. It is also used ext ensively as a corrosion inhibitor on transition metals such as copper.It is used in organic synthesis and as an antiirradiationagent.

ChEBI: An imidazole tautomer which has the migrating hydrogen at position 1.

Imidazole is a heterocyclic compound with a five-membered planar ring. It is amphoteric and highly polar. The pharmacophore of imidazole exists in bioactive compounds including amino acids, plant growth regulators and therapeutic agents.

Imidazole derivatives have antibacterial, antifungal and anticancer functionality. It interacts with DNA and also binds to protein and stops cell division. It also acts as a microtubule destabilizing agents and inhibits topoisomerase and Cytochrome P450 Family 26 Subfamily A Member 1 (CYP26A1) enzymes. Imidazole based anticancer drug find applications in cancer chemotherapy. It is used as buffer component for purification of the histidine tagged recombinant proteins in immobilized metal-affinity chromatography (IMAC).